Since its inception, the medical devices industry has been through several stages of innovation. Historically, all medical devices were basically stand-alone instruments like stethoscopes or thermometers, used either for diagnosis, monitoring or treatment. Over time, this changed to automated but individual, discrete systems, typically used for personal health tracking applications such as for the measurement of blood pressure or blood sugar levels. Variants of these systems could be fully automated applications that measured specific data, processed it and displayed the resultant reading.

After this came discrete devices which not only measured and processed data but used the resulting reading as information for further processing. A classic example of these types of devices is fitness devices or wearables, which typically display multiple functionalities. The logical next step to this was the development of intelligent devices or devices which were no longer discrete systems but were connected to a larger, distributed network such as e-health or connected systems with mobile applications. Such a system might consist of a variety of devices, all of whose outputs, readings and recommendations one can access through ones mobile. 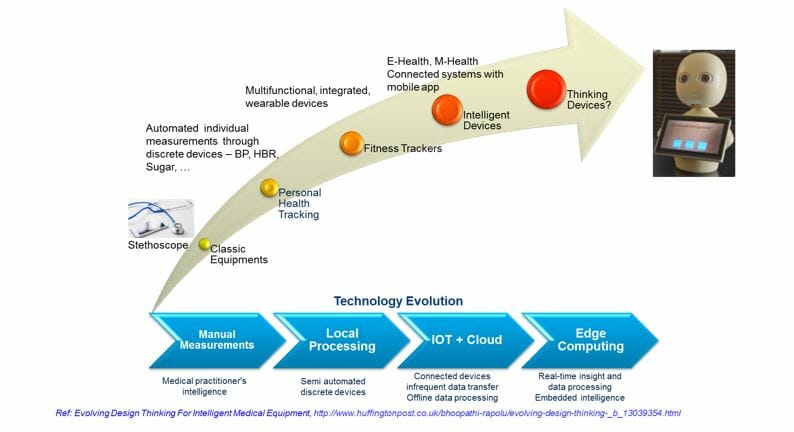 Experts predict that the step that will follow this stage of our history will be one that contains ‘Thinking Devices’. These are devices which will start thinking on their own and will generate a diagnosis as well as suggest a course of action based on the information captured. Getting to this level would mean machines which can think and this in itself is quite a challenge. Thinking basically means the adaptive manipulation of information to achieve the desired result. A simple example of adaptive manipulation is as follows- say there is a change of 2 to 3 degrees Celsius in my body temperature. Now a standard device such as a fitness tracker which does not have adaptive manipulation might read this data and immediately give a notification that the body temperature is higher than normal. On the other hand, a thinking device with adaptive manipulation might take into account environmental factors and instantaneous conditions such as body warm-up exercise on an extremely cold day and process all this information to conclude that the 2 to 3 degrees rise is quite normal for such conditions and accordingly send an update that everything is fine. Thinking capabilities provide a device to raise an alerting alarm in case these conditions last for a longer duration and dynamic thresholds for the ‘longer duration’ are learned with examples and experiences for different peoples and conditions. 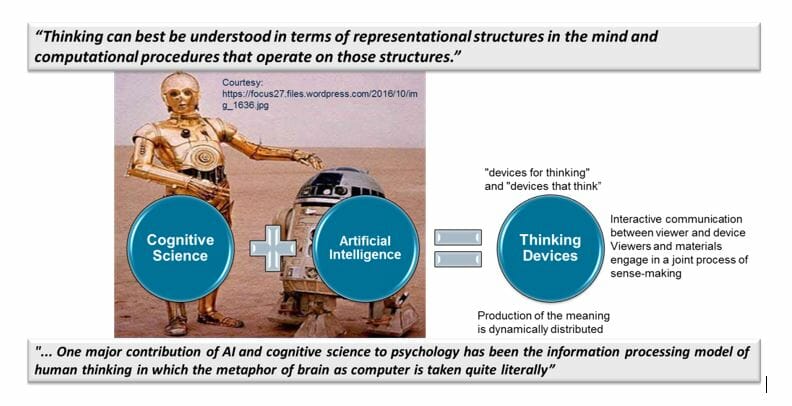 The fundamental characteristic of such devices is continuous learning and self-improvement. So we are talking of devices which have the ability to self-correct based on actions taken and results achieved. As can be expected, creating such thinking devices is quite a challenging task especially for a ‘local thinking’ in the unconnected world with limited resources. Many companies are already working to achieve this desired result. Examples of such smart devices include the smart bed It by Sleep Number, Intel Radar Pace and the Life Fuels Smart Nutrition Bottle.  However, whether such devices can be called true thinking devices is still open to debate, especially because of lack of emotional intelligence. While one could say that a real thinking device has not yet been developed, the future holds many exciting possibilities which will be coming to reality with forthcoming evolutions in in-situ and in-memory computing coupled with logical and emotional intelligence contrived by art.