Typically, an IoT system or IoT Sensor Network communication is designed using one of the popular low level standard technology like Zigbee, Bluetooth Mesh, Z-wave, WiFi, etc for devices to collaborate with each other. This has made multiple devices bound to different protocol/technology over a period. One of the current IoT challenge is to add a new device in an existing network that is having a different communication protocol to collaborate compared to the existing device network.

Interoperability of the IoT Devices is hence becoming more and more important to build a scalable, adaptable and a seamless IoT Device network.

The IoT ecosystem needs interoperability to create a seamless programmability or configurability of the various products or devices or sensors to connect and collaborate with each other. There is a need of a consolidated common standard that makes devices communicable, operable, and programmable, regardless of make, model, manufacturer, or industry.

Interoperability of the Devices is mainly looked from below main aspects

But, there are also many companies developing interoperability solutions by adopting standards and open-source development with the objective is to improve IoT standardization. A good consolidated Gateway Service Platform (Middleware) is an ongoing/future need; that translates various low-level Data Protocols to an In 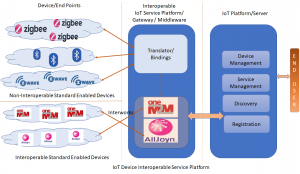 teroperable IoT data protocol that is seamlessly consumed by the IoT Platform layer and as well inter works with other Interoperable Protocols. The existing interoperability platforms and standards are highly fragmented and seems to be one of the reasons why products are not adopting Interoperable Service Platforms and prefer using low level existing technology in many of the cases.

There seems some consolidation have happened among the interoperable platform like Allseen Alliance which provides AllJoyn merges with OCF(Open Connectivity Foundation) to handle some of the above challenges.

While designing the IoT Ecosystem, one also needs to look at Interoperability aspect as well while defining the IoT architecture which will enable to scale products and connect more things/devices of different types.

Interoperability is a definite challenge for the industry and needs to be considered more aggressively to provide consolidated, reliable, secured, scalable and adaptable solution for IoT networked devices/systems. Seamless IoT Device Interoperability is expected to accelerate & unlock the massive opportunity in the IoT market, accelerate industry innovation and help developers and companies create solutions quickly.