The most recent SogetiLabs report, The Frankenstein Factor, is about the fear for Artificial Intelligence (A.I.). A fascinating read which made me think about how I personally relate to A.I.

And how I relate to the increasing impact of technology on our world and society. 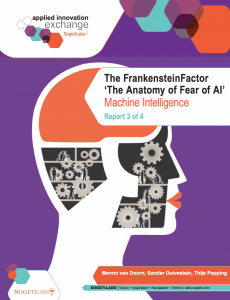 I used to be very optimistic. When social media like Twitter started, about ten years ago, I had a lot of discussions with colleagues and friends. I saw huge possibilities to connect people around the globe, to be informed and educated. To have people understand each other better and cooperate. I behaved as a social media evangelist. And all those things indeed happened, but at the same time social media lead to a huge amount of rubbish, fake news and polarization. One of the results is that people are in a bubble. They only read things within their own bubble. This is exactly the opposite I hoped for and expected. I didn’t see it coming.

Now, ten years later, technological changes are huge. We cannot even imagine the impact it will have. Artificial Intelligence, Internet of Things, Chatbots, Blockchain etc etc. We are not in an era of change but in a change of era.

And, to my own surprise, I am still optimistic. The Frankenstein Factor describes four basic fears which almost every human being has. More positively formulated it’s about  four human needs:

The fourth one, the need to be needed, relates to the fact that technology tends to take jobs.  There is no doubt it does and will keep doing that. But is that bad? I don’t think so.

A.I. will definitely take over repetitive tasks. But people were never made to do that anyway. What will remain are the tasks for which typical human talents are needed. Creativity, taking care of each other, human empathy, keeping each other company, coaching, giving guidance. Every human being will be needed, not to do administration but to be a social human being. That’s progress, I would say.

Luckily I found some confirmation for this in the report. Kevin Kelly analyzed seven stages people go through when they realize their job can be replaced by a robot: 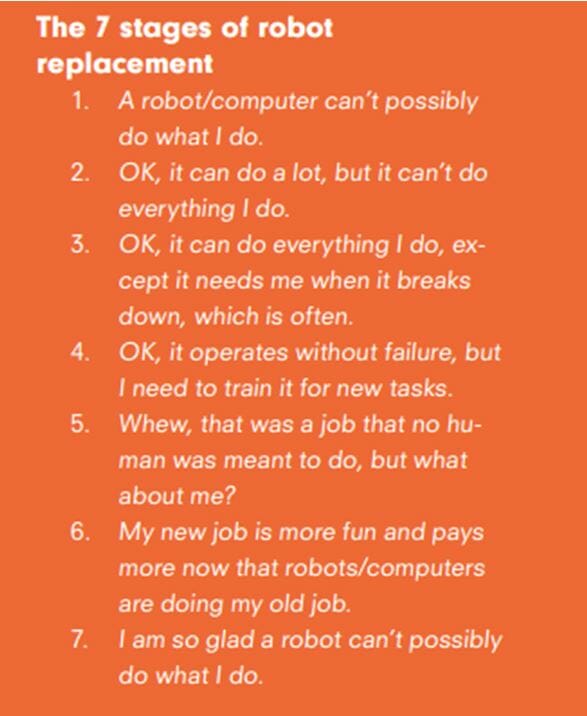