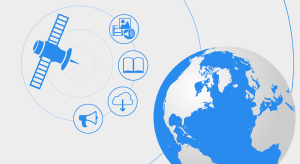 Do you want to capture free Wi-fi connection in the middle of Siberia or in any free internet access area? This could become a reality in 2015 thanks to the “Outernet” launched by an association of New York Media Development Investment Fund (MDIF).

This type of project is a huge issue in terms of free access to information for 60% of the world population, which has no access to the internet now. To overcome this problem, the idea is to disseminate data from space via a constellation of satellites capable of sending loop digital content anywhere on the planet. The satellites in question are Cubesat, small cubes of 1 kg to 10 cm square originally developed by the University of California and Stanford in the United States.

Many universities and NASA to conduct measurements and experiments in Earth orbit currently operate these low-cost satellites. Outernet plans to deploy hundreds of these micro satellites at an altitude of 500 km to cover the entire globe. Once in orbit, ground relay stations send information from the web to the satellite, which then broadcast the loop to Earth. The wi-fi signal should be consistent with current standards and be compatible with existing receivers. So, a standard tablet or smartphone could connect without any problem on those information flows.

But “Outernet” will actually have little to do with the internet we use daily. It does not offer full access to the web, but only limited and selected content (local and international news, wikipedia, openstreetmap and Ubuntu distribution, educational sites like Coursera or Khan University).

By cons, it will be impossible to surf or perform tasks that require sending data. We are therefore dealing more with a kind of modern radio. The goal is not to compete with the major Internet service providers in major cities but to provide basic internet to unconnected or censored people. This raises a number of questions:

Please Mr. Kennedy, Help us to safeguard a full Internet access for everybody.

Reference: soundtrack from the Coen Brothers’ movie “Inside Llewyn Davis”