Like it or not, we live in a world where expectations are high: development teams are asked to get more done, in less time, in the face of moving targets, last-minute design changes, and complex, difficult-to-understand systems.

And those are the easy engagements.

In managing software development projects for well over two decades (yes, I’m that old — you can check my LinkedIn profile) there’s one specific problem for which many solutions have been proposed — managerial, organizational, governance — and which seems to elude most approaches and slow-down most development teams.

The canonical example is a project, where the team is tasked to put up a new website, one that includes dynamic content display, based on data accessed and delivered by back-end services.  If all of these components (or even just some of them) must be developed from scratch, the typical proposed project plan looks like this:

But, given the reality of simultaneously developing a UI layer, a services layer and a data access layer, the schedule soon becomes this: 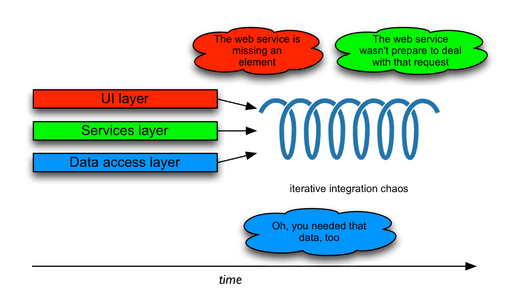 Now, no development team, no matter how professional, experienced and well-managed, can hope to avoid the fundamental issue that creates this “integration chaos” without understanding just why this happens.

When a project has multiple layers, and one layer depends on one or more other layers to be functional before the stakeholders can see the result in action, a framework or process is needed to insure each layer can continue its development, testing and stakeholder review uncoupled from other layers. That uncoupling should be done in a manner that permits — at all times — checking of the correctness of the developed layer in the face of a wide range of behaviors from the replaced layer.

A pretty obvious statement, it would seem.  But the devil is in the details of the framework/process chosen to uncouple these efforts.

One framework, likely in use since modern software development began, is “stubbing” or “mocking”.

Stubbing and mocking are intended to be very context-specific, short-term solutions to missing or hard-to-access software components, usually early in a development cycle.

If you’re trying to write a unit test and need to replace a simple call to a database, external libraries (e.g., file I/O) or other system API, stubbing might be perfectly suited for your needs.

While there are situations in which stubbing/mocking can help with development tasks in the face of missing dependencies, such a solution is exposed to the same issue as any such solution in a fast-moving environment where changes can happen unexpectedly.  Stubs are typically throw-away placeholders, designed with only enough fidelity to the missing dependency to represent a limited and short-term solution.

However, with the advent of large development teams, the widespread use of SOA (including the user of third-party services), and the rise of Agile methodologies, stubbing and mocking became less valuable to the development process.

Service virtualization, on the other hand, is generally not context-specific and can be used throughout the project cycle, including production, by all developers.

Service virtualization may appear, at first, to be not much different from stubbing or mocking.  Both classes of solution allow development and testing of software components in the absence of dependent components.

Where they differ, however, is in:

Service virtualization, in its most common use, replaces missing dependencies at well-defined and well-documented interfaces that are:

The bottom line is, no matter how a service is virtualized, this should always be true:

…as far as an application is concerned, those responses issued by virtual services are as good as the real thing — What is Service Virtualization?, SmartBear.com

As a result of this creation of a replacement for a missing dependency, and one which is of high fidelity, indistinguishable from the real service:

How does one accomplish implementation of a virtual service?  A full exposition would be rather long (and perhaps the subject of another posting), but the general answer is pretty simple.

There are two common ways of setting up a virtualized service.

Most COT frameworks support all four techniques to some extent:

In addition, where warranted:

The choice of toolset often depends upon the client’s existing vendor relationships, knowledge and supporting infrastructure.

An excellent checklist of service virtualization tool attributes can be found at: