With this series of three articles, I would like to highlight how much we need a new paradigm, a new way of thinking, to deal with complex systems, i.e. in our context, socio-technical systems or enterprises.

A system is said to be complex if its evolution is unpredictable. This complexity comes from the number of elements (of different nature, including human), the number of interactions (matter, energy, information) between elements inside the system, and between the system and its ecosystem. This complexity comes also from heterogeneity of the elements; in our context of socio-technical systems, they could be made of humans, computers, satellites, trucks, a set of business processes, software, etc. Complexity, for those who are responsible of designing/building/maintaining or “simply” understanding such systems, is also a question of space (how extensive the system is) and time (the system lifecycle), therefore by derivation a question of speed.

In system theory, one notes that all systems have goals of stability, growth and interaction. For example, the primary goal of static, dynamic and cybernetic systems is to seek stability. While the primary goal of open, living systems is growth and stability[1]. Then, systems can be distinguished by their goals. When they are put together in a network of systems, to achieve their own goals and the high level goal of the system they contribute to, more often, they have to interoperate. A new ontology appears: System of Systems (SoS). INCOSE defines SoS as something that “applies to a system‐of‐interest whose system elements are themselves systems; typically these entail large scale inter‐disciplinary problems with multiple, heterogeneous, distributed systems.”[2] ; while Luzeaux and Ruault[3] define a SoS as “a collection of systems that which could be acquired and/or used independently, for which the designer, the buyer, and/or the user looks to maximize the performance of the global value chain, at a given time and for a conceivable set of collections.” So, depending on the scale (zoom effect), or point of view, or point of interest, different classes of problems appear. What is the space of such problems in our context? 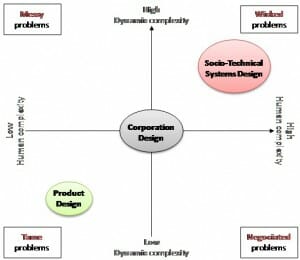 Senge[4] defines the space of socio-technical problems by considering another dimension of human complexity. Conventional engineering systems, even those having a high degree of detail complexity like a commercial airplane, fall into the category of “tame” problems. Traditional corporations, however, have much more human and dynamic complexity, making them political or “negotiated” problems or “messy” structural dynamics-type of problem. Enterprises, with their focus on longer time scales and a broader set of stakeholders, by definition has the highest degree of both human and dynamic complexity, making them “wicked”.

In the coming article next week, I will talk about problems we have to face in our daily work inside socio-technical systems, on a SoS point of view. In the 3rd article, I will talk about reflexivity and how it could help us to better understand these types of systems.