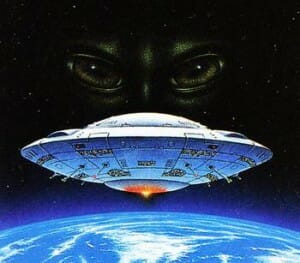 Why have we not found extraterrestrial life? Could it have something to do with IT security? With now thousands of habitable planets spotted, some people are starting to worry that the fact that we have not yet received any intelligent signal from outer space means that perhaps there is no intelligent life outside of earth. Or even worse: that it existed before, but didn’t survive. That perhaps there exists a step in every intelligent society where they – accidentally – obliterate themselves. Perhaps a weapon that is just a little too powerful, a drug (or social platform?) that is just too addictive, a virus that is too effective or a scientific discovery that -‘whoops’- turns the planet into a flaming ball of plasma. This could then of course also spell doom for mankind, as these things may lie in our future.

Then again, why would we receive a signal that is understandable? This expectation seems to be built on one of two expectations:

Aliens purposely broadcasting could be an illusion because perhaps even in a super advanced society nobody is willing to invest in anything that takes thousands to millions of years for a two-way message (assuming the speed of light is indeed limiting the speed a message can travel). Mankind has sent out some spacecraft with a message on board, but if this actually reaches any intelligent being ever it would really be like winning the cosmic lottery.

And then the accidental signals: analogue, leaking signals are only temporary. The power needed to transmit signals is going down all the time, signals become binary and ultimately become encrypted. And low powered, encrypted signals are basically noise… unless you have the key. So perhaps we should search for extraterrestrial life by trying to decrypt all the noise we can find in the sky. Perhaps there is an intelligence agency out there who want to repurpose some of their equipment and change their name: alien intelligence agency?