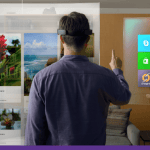 I don’t know what’s more impressive: the new piece of hardware by Microsoft called the HoloLens or the fact that they kept it under the radar despite 7 years of development.

During their Windows 10 event Microsoft showed off a new OS, a new browser and a bunch of other stuff, but to me the most interesting thing they presented was the HoloLens. Microsoft HoloLens is not exactly a holographic system, but an augmented reality device that blends the virtual and the real in one (what looks to be) seamless, head-mounted experience.

HoloLens is a Windows 10 device and, according to Microsoft, should integrate smoothly with some of their other Windows 10 apps and services, including Skype. The augmented-reality headgear is full of sensors, but the most powerful one may be the 3D depth sensor. It’s the same one you’ll find in the Kinect and it is capable of building a detailed 3D mesh map of a room and everything in it. Once HoloLens knows what’s in the room, it can essentially drape 3D imagery over it so that it looks as if the digital objects and textures are part of the same environment as real world walls and furniture.

Google glass?
Microsoft seems to be very clear on how they will market this device. Compared to Google Glass, which was initially presented as a 24/7 device, Microsoft presents HoloLens as a device to be used in specific contexts where projected UX’s and handsfree interaction really works. It also works as a stand alone device as opposed to Glass that is in need of a smartphone connection.

But like Glass, the key to the success of technologies like HoloLens is the ability of software developers to create useful experiences. Microsoft’s move to integrate the technology in Windows 10 broadens its reach for developers of course.

There’s no info on price and availability yet. But like we did with Glass, we hope to get our hands on one as soon as possible.

Wired already has an early hands-on review, be sure to check it out.