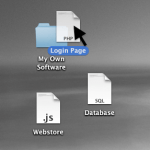 Nostalgia time! When I was in high school, I remember, Internet was opening up to the world. Netscape Navigator and Trumpet Winsock were distributed to the public via diskettes; and internet connection cost about €4.50 per hour. We logged in and looked in wonderment at the stunningly awesome Space Jam movie website (which is still there, by the way; and just as awesome as ever).

Back then, I participated in a national computer science competition. One of the tasks in the competition was to create an HTML page. It was bit of a mystifying skill. In order to create a page, one needed to know how the browsers processed the tags used in the text editor and interpreted them to the user.

We still do web development in the same way, so not a lot has changed since then. Or has it?

Working in the IT field, I find myself often realizing that everybody does not look at software development like I do. I want to see the code, know what it does and why… but that’s my job. There are people who only think of IT as a tool, not as a means.

That’s where the scripted and automatic development takes place. For people who want to create everything by a drag-and-drop method… it will soon be possible. If you look how the programming languages have evolved, you will notice how, nowadays, one can easily create things (in just one line) that required a lot of work in the past.

A good example of scripting language is the Wolfram language. If you take a look at the video, it shows many things one can do with it. The variables can be twisted and turned any way you want and you can use pre-scripted functions to create graphical interfaces right away.

Let’s talk a little about Macaw, the ‘code-savvy design tool.’ It’s nothing new, really – we remember that in 1997, Macromedia Dreamweaver (later obtained by Adobe) could already let users create websites simply by clicking and dragging. There is one key difference, though: the code that Dreamweaver created was a mess. The usage of its JavaScript modules meant that the page was filled with unnecessary scripts.

Macaw has evolved. It tries to make the code as clean and efficient as possible. This means that the website is also maintainable without the software. It’s not perfect yet, but it shows us where everything is going in the future.

Then there’s The Grid. The Grid boasts of AI websites that design themselves; and this software will be available in the spring of 2015. Everything is dragged and dropped in place, all the code under the hood will be taken care of automatically. Sounds unrealistic? Might be. Might be that the system just includes pre-defined templates even though it’s not claimed to be. However, the seed has been planted. If the Grid doesn’t ‘perfect’ the idea, someone in the future will.

Let’s make one thing clear. Everything I’ve said in the post doesn’t mean that the software development will change overnight. There is a huge area of software development that still needs extensive knowledge of the hardware used. However, in the future, even ordinary people will be able to develop something simple for their need.

Think of it like cooking. To cook 3-star Michelin courses for 1,000 people, you need Larousse Gastronomique, an enormous amount of talent and practice and the best tools. To feed yourself, you need a frying pan, a stove and eggs.

It all depends on the purpose.