October 17th brings General Availability for the first update for Windows 8, referred to as Windows 8.1. Windows 8 is Microsoft’s attempt to bring its OS ecosystem into the touch age and compete with Apple’s successful iphone and ipad devices running iOS, and Google’s Android powerhouse. Since the release of Windows 8, the media and industry “experts” have called Windows 8 “Microsoft’s next Vista fiasco” and that Windows 7, however successful in corporate environments, can’t compete when compared to touch devices the competition has in the consumer market.

Returning a year later with Windows 8.1, Microsoft listened to the feedback of corporate users and tried to ease the shock when transitioning from Windows XP or 7, when moving to Windows 8. Many enterprise users put the icons for the applications they use most on the desktop or taskbar. Microsoft has added the ability to boot straight to the desktop if you chose, and while pressing the Windows button takes you the “Metro” grid of icons and apps, you can customize what now appears there and make the background match. Most users I have spoken to that tried the Windows 8.1 Evaluation, liked the consistency between the desktop and, at least initially, only bring up the tiles when launching a new app. With Windows 8.1 Professional and Enterprise, all of your Windows 7 applications work just the way you expect them to, so the impact of the change for most users will be minimal. There are many new and revised features in Windows 8.1, and it warrants another look.

It’s not just about Windows 8.1, it’s the devices

With the release of Windows 8.1, it’s also time to re-evaluate Windows 8 and the new ecosystem of devices that enable it. Critics panned the battery life for the original Surface and similar devices, since they constantly compared them to an Apple iPad. I have never thought this was a fair comparison, as the iPad is running a scaled up version of their phone OS (you remember the apps are compatible between the two) and Windows 8 for Tablets is a full OS, not the same as their phone, although Microsoft does seem to be headed in that direction.

8.1 is designed to fully embrace new computing devices like tablets and Ultrabooks by offering touch support, advanced compatibility features and more online security, data protection and better battery life. These benefits can be further enhanced by combining 8.1 with new Intel based architecture and processors that offer enhanced performance and manageability than ever before. I personally own the Sony Duo 13 2-in-1 with an i7 processor. I have been using it for a month, and even with many of my legacy apps installed, I average 9 to 10 hours on the battery. I was sceptical at first, but many the benchmarks reported by devices utilizing the Intel Haswell architecture are very accurate. I realize that this particular machine is at the high end of the device range, but it does show us what is possible. 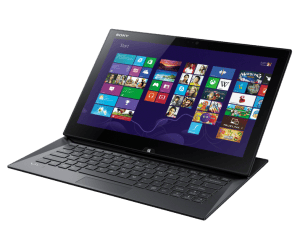 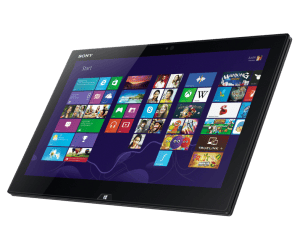 Example of a Windows 2-in-1 Ultrabook

I travel frequently for work and the Sony Duo 13 has become my primary machine as it supports both laptop and tablet modes. I realize many people will say at just under 3 pounds its heavy for a tablet, but I argue those people seem to have completely missed the point of the 2-in-1 convertible. Like an ipad, you aren’t supposed to be able to “do productive work” while in tablet mode, you just have all of your data with you to consume, review or demonstrate. If you want to be productive, you switch to laptop mode and you have a full power system with touch. That’s something an ipad can’t do, even if you do add a magnetically attached Bluetooth keyboard.

Windows 8.1 focus on the Enterprise

Enterprise customers, as well as consumers, want touch based input devices. IDC[1] says that ‘touch will be everywhere by 2014’. In fact, Businesses are 1.7 times more likely to prefer Ultrabook devices over notebooks[2]. An Ultrabook is a device that has the same power and a standard laptop, but weights less than 3 pounds and has a touch screen. If you have ever had to run from one terminal to another in an airport to catch a connecting flight, you appreciate having a device that is so light compared to the 7 to 8 pound beasts of just a couple of years ago. If the power of the machine is the same at a third of the weight, why wouldn’t you want it for that reason alone?

Of course, IT managers must carefully measure and justify all their investments, taking into account not only the upfront price of new equipment, but also all ongoing implications in terms of staff productivity and maximizing existing investments. When introducing a new mobile computing model, organizations must therefore find a solution that is easy to implement and maintain, makes sense for end users, and is easily compatible with their existing IT ecosystem.

An analysis of Tablets in the Enterprise[3] carried out in January 2013 by Intel-IT on the TCO of Windows 8 running on Intel technology-based tablets. It indicates that Windows 8 on Intel tablets could actually be around 25% less expensive to operate than on other tablets:

With the rise of Bring Your Own Device (BYOD) and the consumerization of IT at work, users now expect to be able to use a sleek, attractive tablet or convertible device in the workplace like the one they have at home. This places pressure on the IT department to support a wide array of devices and operating systems, some of which may not meet corporate security requirements. Centralized software updates and security patches may not work with non-Windows devices so IT teams have been trying all sorts of device management solutions as they expected a Windows-based mobile device that is both enterprise-ready and consumer-friendly would never come.

The popularity of tablets and touch-based Ultrabooks and convertibles in the consumer sphere shows that users are increasingly comfortable with the idea of interacting with their favourite devices without the support of a keyboard. The touchscreen is a familiar as they have probably already have an iOS or Android phone and users now expect to be able to use similar devices in the work environment. When you have a well-integrated operating system, software and computing platform, the touchscreen interface can enable a desirable user experience and offer efficiency based task work when you introduce touch based versions of existing applications.

It’s time to re-evaluate Windows 8 with the 8.1 release on the new Intel architecture platform. Windows 8.1, on a device with the Intel Haswell or Baytrail architecture, is designed to optimize the potential of touch with compatibility with existing legacy software. You might just be surprised.

The Ultrabook Experience and How it Will Redefine Personal Computing, January 2013 Gartner

Tech Aisle, US SMB Ultrabook Adoption and Trends, May 2012

TechRepublic, Tablets in the Enterprise: Comparing the Total Cost of Ownership, Intel January 2013

Darren Baker is the Business Development Director for Sogeti’s SMART WorkSpace Solutions. Darren helps customers evolve their workplace strategy and vision into the new world of work based on SogetiLabs Connected Workforce methodology. Darren is a public speaker and has spoken on behalf of Sogeti, Intel and Microsoft and appeared in several Microsoft videos. Darren also manages the Sogeti Intel Alliance, and travels throughout the 13 Sogeti operating countries and conducts training for the sales associates and consultants to ensure Sogeti can deliver cutting edge technology solutions.