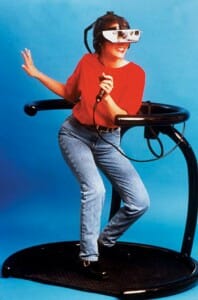 Lots of press has been generated on virtual and augmented reality devices and software recently. Two of the most commonly referenced devices are Oculus Rift, a virtual reality hardware and software company, and Google Glass, an augmented reality device. When Facebook bought Oculus Rift for $2B US, it signaled that these reality enhancing/replacing technologies were no longer just something for sci-fi novels. They are serious products that can be used in wide ranging ways.

First of all, what is the difference between augmented and virtual reality? Augmented reality (AR) is a layer on top of your surroundings – a mediated reality that enhances the view of reality with, for example, sound, video, graphics or GPS data. Virtual reality (VR) replaces the real world with a simulated one and totally immerses the individual in the generated world with sound, graphics and other sensory input.

Hardware – glasses, goggles and cowls – and software are being developed and improved rapidly. Battery life, and the size and weight of the devices are two priority enhancements that must be improved in order to guarantee wide-ranging acceptance by the public. So, who are the target audiences?

Initially, VR is aimed at gamers. The popular massive multi-player online space simulator, EVE, will be one of the first commercial products for Oculus Rift. Also, older games, like Doom from the 1990’s, are being revised to be played in a VR world.

Both AR and VR are being used in retail today to allow shoppers to see what furniture would look like in their home, how paint color looks on their walls and to try on clothes in a virtual changing booth. Also, in medicine, doctors are using AR devices to overlay a patient’s vital statistics and history during a consultation. And, a surgery has been performed remotely with the doctor viewing the patient and controlling a laser scalpel miles away with VR.

Construction, transportation, industrial design and many other industries will need AR and VR technology to improve their capabilities. Also, supporting business functions can benefit as well from heads-up displays, virtual meetings and real-time language translation.

In my office in Dallas, Texas, we have worked on several AR proofs of concept applications for retail customers. What are you working on in this realm or what are your customers saying about this technology?