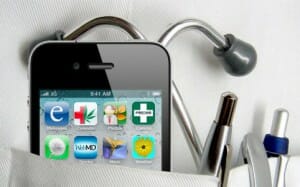 The smartphone has already usurped the role of the computer in a number of ways, thanks to the former’s increasing processing power. In fact, some scientists are using the CPU capacity to replicate an “old” idea that use idle distributed computer power to execute complex processing, taking advantage of the huge number of such resources; and have extended this idea to smartphones and tablets as well.

One example is a new App developed by the Stanford University scientists and Sony. It’s a smartphone software that will be used to fight diseases. This innovative Folding@home mobile app is an extension of the original Folding@home project, which uses idle processing resources from thousands of personal computers to produce a distributed simulation of protein folding, computational drug design and other aspects of molecular dynamics with the hope of unlocking secrets to treat Alzheimer’s and Huntington’s diseases, and different types of cancers.

The mobile app is expected to provide much more than just additional resources, as there are millions of people with powerful phones. The Stanford team believes, if we use these devices efficiently, great results could be achieved.

The primary objective of any biomedical scientist is to quickly find a better / improved drug for a patient; however, this process that takes a lot of time, which the patients sometimes don’t have. Although the proteins of interest require only milliseconds to fold, even a supercomputer would need thousands of hours to complete this task, due to the complexity of the process involved. Hoping to bypass this problem, the Stanford team is striving to deliver results in a week or even less time, using smartphones, tablets and classic PCs.

This mobile app will work when the phone is completely idle, especially when you are asleep and the phone is charging. However, as soon as you unlock the phone and begin your day, the application will automatically close and the simulation in progress will be passed on to another machine.

Once the App’s beta testing is concluded later this year, it will be available for all smartphones running on Android 4.4 and above platforms. The current beta version is available in Google play apps store, and is compatible with Sony’s smartphones series.