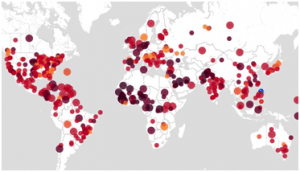 #Ebola spreads faster on Twitter than the real disease, and the Earth is living the nightmares shown many times by Hollywood. How can Big Data help us?
A few  days before Ebola was declared epidemic, HealthMap developed an algorithm to detect and predict how the haemorrhagic fever would evolve. Scientist are not yet convinced about its potential, but it is now clear to the global community that IT can really help.

Collecting tweets, news, calls to emergency services, airline services etc., this algorithm can predict the evolution of the disease. Time is key in this kind of emergency and big data alone will not be enough. The advantage of an “algorithmic approach” is that the problem can be attacked from all the angles. For example, Nigerian Minister of Communication Technology Omobola Johnson highlighted how technology and social media have been key success criteria to her country being Ebola-free.

Are these entrepreneurs heard by the community? Is this knowledge cross-shared in order to obtain some good for the entire world?
We can see some first steps: Microsoft offered its Azure platform, the Gates foundation already gave $50MLN, and IBM created dedicated hotlines to help people (through calls and texts) by calling ambulances and highlighting power problems, but the impression is that this is still too specific to the IT world.

My final question has, however, a much larger scope and – unfortunately – I don’t have an answer… We are today surrounded by all the evolutions that technology can bring us (if you read French I strongly suggest this, where Google Glasses are used during remote surgery) but are we sure that we are not misleading the content with the container?

The technology is just the container, the machine we can use to achieve a purpose, but WE are the value and WE are the change. I like to see that at Sogeti, we don’t forget this and we really leverage IT in order to “give back” to the others, because – in the end – we are the real Big Data.