The meaning of “robot”

The word robot is a Slavic word meaning “forced laborer”, but was first used as a mechanical being in 1920 play R.U.R. by Karel Capek.

We often think of robots when we see machinery with humanoid features. Industrial robots with arms or eyes are perceived as robots, while an assembly line is not perceived as a robot, even though it has sensors and motors to control its own speed.

Terminator (a robot from an action movie,1984) is often the imagined picture of a robot. A superhuman that is stronger, faster, more robust, and more reliable, than a regular human being. But why should robots become human like?

An assembly line is a robot, even though we do not perceive it as one. What other robots are out there that we don’t perceive as robots? Self-Driving cars is an example.

The meaning of “bot”

The term “bot” is a shortening of “robot” and emerged in late 1980’s. People are less judgmental of what a bot is, than a robot. Often robots are thought as “mechanical-humanoids with AI software”, while bots are more perceived as “software only” or “non-humanoid devices with AI software”, such as phones, fans, fridges, fire alarms and washing machines, when powered by at least a weak AI.

More and more people live in smart homes, which also can be perceived as bots. If you have a smart home, you are living inside a bot.

Machine Learning from the robotics point of view

Software (and partially hardware) is all about mapping the inputs with the correct outputs to solve specific problems.

Humans have been able to keep up with the growing complexity, by adding multiple concepts and abstractions layers:

But many problems are simply to complex for a human to deal with: 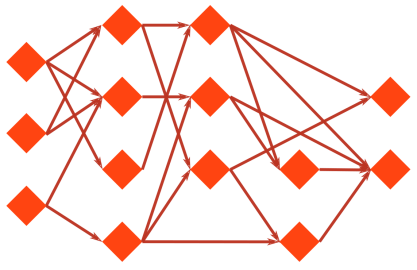 There is a border area of complexity, where human developers can compete with bots, but it takes a lot longer for human developers to develop software, than it is for bots to learn new “tricks”.

Example:
In 1997 a computer called Deep Blue, beat the human chess champion. Playing chess is very complex and the computer was developed to calculate up to 200 million possible chess positions per second. Twenty years later in December 2017, Googles Alpha Zero beat the champion chess software, after teaching itself chess in only four hours. I’m pretty sure it took a lot longer than 4 hours to code Deep Blue.

Continued in Part 2 – How bots learn, unlearn and relearn

Testing in the digital age is a new Sogeti book that brings a updated view on test engineering covering testing topics on robotics, AI, block chain and much more. A lot of people provided text, snippets and ideas for the chapters and this article (part 1 of 3) is my provision for the book, covering the chapter robotesting.

The book Testing in the digital age can be found at: https://www.ict-books.com/topics/digitaltesting-en-info