At the SogetiLabs NL meeting this week, one of the members showed us a wearable device for his smartphone. During diner there was an interesting discussion on the future of these devices. Over the last decade, on the one hand there was a move away from wearing watches as time-keeping devices, as people started using their smartphones for this functionality. While watches also hold an emotional value (fashion, keepsake), most people do not actually appear to need the classic variant any longer.

With the rise of the smartwatch this could change. The smartwatch offers not only timekeeping, but will also connect you with your device in other ways. Which leads us to the second topic of the discussion, on disruption. While the trend appears to be for people to want to take back control over when and how they want to be disrupted by things like incoming messages, social reminders and the likes, wearing a smartwatch could potentially make ignoring these signals a lot harder. The most prominent feature of the device is to make it easier for you to get information and notifications real-time, and sending information on-the-go, without having to reach for your phone. It would take an extra step for you to turn off the notifications or instruct the device on when you can and cannot be disturbed.

Inspired by this discussion I wanted to find out more about this topic, and found some interesting articles by the New York Times and by Io9 on wearable technology that feels like skin. Cool!

There are now companies working on creating wearables that adhere to the skin like temporary tattoos, or attach to the body like an old-fashioned Band-Aid. There is a growing number of startups working on creating tiny computers and sensors that live on (or even inside) your body. While this raises all kinds of privacy questions, there are also some clear benefits. You cannot forget them, they cannot get lost, and any readings from sensors could not be more close to you.

As Thomas Benton points out in his SogetiLabs post ”We are the next major computing platform”: “In the not so distant future computing technology is going to be integrated into more and more of the things we wear and will eventually migrate into our bodies as implants.” 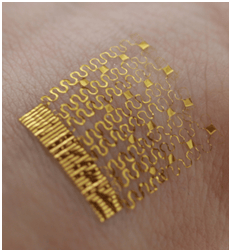 VINT also had a look at these new technologies in their second report on Internet of Things “Empathic Things, Intimate Computing from Wearables to Biohacking”:  “The functionality of wearables is determined by underlying technologies such as sensors, smart materials, and automatic recognition of gestures, eye movements, or speech. As they improve, more advanced wearables will be put on the market. A next step could be the digital tattoo, for example, applied on the skin to measure what happens beneath the skin – from blood circulation to heart rate, body temperature and even brain activity.” Also: stylish! 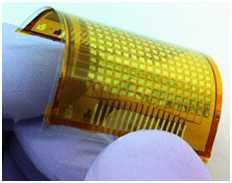 The devices can be shaped like temporary tattoos, so you can just create any design. There’s even work being done on paper-thin displays that work as wearable touchscreens. Imagine a gold plated tattoo that reads your blood pressure, in the shape of your favorite sports team. Or a wearable display that shows a kids favorite cartoon character while monitoring their heart rate.

These new technologies, while still in their early stages, already show a lot of potential for adding non-intrusive ways to measure and monitor, and possibly to enhance people in the future. In Japan, the University of Tokyo is already working on e-skin you can wear as a layer on your skin. 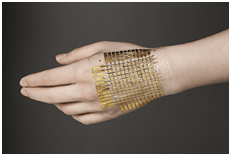 This would add new possibilities for measuring over a bigger surface, but also for powering devices (by producing and harnessing friction energy) or sending new input to the wearer. For a fireman, we could remotely measure surface temperature via e-skin, monitor critical body functions such as heart rate via tattoo, or order the dispense of cooling agents from tiny devices. For defense personnel, a skin-worn touch screen for relaying real-time information to their team. For a football coach, a non-intrusive way to measure team-statistics.

So what do you think? Will skin-wearables and e-skin become the next big thing in the foreseeable future, or will we be stuck with devices like wristwear and eyewear?