I tried to watch some vlogs but always tuned out after two minutes of watching a complete stranger live his life. I didn’t find it appealing at all. But at the same time I knew about the massive amounts of vloggers and followers, so something was bugging me… I knew something was happening I didn’t understand, so I did a little bit of research and asked myself “What’s going on in the world of vlogging?”

Once upon a time (on the 2nd of January 2000 to be precise) Adam Kontras posted a video in a blog. He talked about his adventure in search of fame in L.A. This is seen as the first vlog in history; without anyone realizing it at that time, Vlogging was born!

Now in the year 2017, vlogging is a big part of the internet. A lot of teenagers try to become famous through blogging and to earn money by product placement, endorsement deals, book deals, tours, and to get paid per viewer by Youtube. Only a few succeed; in the Netherlands, we have Enzo Knol, the world has PewDiePie.

PewDiePie, also called Felix Kjellberg, was listed #1 in Forbes most earning vloggers top10 list. Like most popular vloggers he is under 30 and in a lot of vlogs he plays and comments on games. With more than 50 million subscribers he earned around $15 million in 2016!

When you are watching a vlog from PewDiePie you may think he is just playing and acting silly. But I think it’s actually hard work: you’ll need to direct, produce, edit, act and do some PR all by yourself. It takes a lot of discipline and creativity to produce the continuous stream of qualitative good vlogs. The appeal of vlogging

PewDiePie streams games, others give make-up tutorials, elaborate on their day, tell about their coming-out or about their problems. If you want to hear somebody’s thoughts about something: chances are high somebody made a blog about it. So the quantity of opinions and shared experiences can be an appealing aspect.

Another appealing characteristic is revealed in a survey held under 13-18-year-olds in the VS*:

Vlogging is often more ‘raw’ and authentic than blogging or the carefully prepared (TV)interviews with idols. To make a vlog it isn’t always necessary to have a deep message, more important is to give a view in your “private” life. I think it’s more than just the Reality TV voyeurism; it’s one step further to a two-way ‘real connection’. These are reasons teenagers judge vloggers to be more relatable and engaging than ‘traditional’ popstars.

More and more platforms are seeing the value of vlogging. Youtube is getting competition from game-stream platform Twitch (Amazon already foresaw the value of streaming and vlogging in 2014 and bought Twitch for $1 billion). Traditional media such as newspapers and television are inviting vloggers for interviews or collaborations.

A lot of vloggers are also present on other ‘new’ media as Instagram, Pinterest, and SnapChat. (Are Facebook, Twitter, and LinkedIn now the ‘old media’?) I didn’t really liked SnapChat, but was surprised about how ‘big’ it is:

Are there market opportunities?

Yes, companies such as Taco Bell see market opportunities and create their own SnapChat augmented reality filter for example. I’m not saying I like the filter (I think it’s hideous), but apparently other people like it; the commercial is spread while sending selfies and ‘playing’. 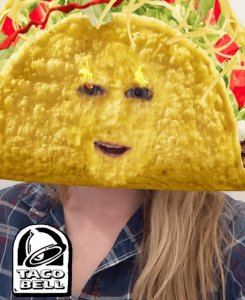 Other companies (like General Electric, Gatorade, The New York Times, Domino’s, and much more) experiment with creating interesting content on SnapChat or vlogs to engage their customers. Or they flip it around and ask their customers to share pictures with their product to win prices. Sending sales or promo codes solely through SnapChat or vlogs is another strategy or giving access to the company account to somebody famous for a day so he/she can post vlogs and updates.

* Research was conducted by Jeetendr Sehdev of the University of Southern California.