Dag Kittlaus co-created Siri and now he presented something better.  Yesterday at the Techcrunch Disrupt event he showed a life demo of ‘conversational commerce’. A term coined by Chris Messina of Uber. Kittlaus took his phone and said things like “Pay Adam for the beers of yesterday”, and in a split second it was done. You might argue that Amazon Echo  could do the same (if their API talks with ‘Venmo’, the microservice that Viv is using). But  forget about the compe 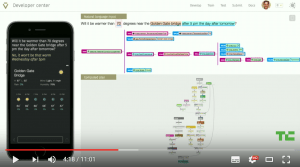 tition between Cortana, Watson, Echo, Siri and Viv. What  is pretty amazing is shown in the slide left, when Kittlaus opened the curtains behind the interface. Viv is building a software program in real time, including the representation, each time a question is asked.

“When it understands intent of user, it generates a program as needed,” Kittlaus said. This is Viv’s secret sauce: Dynamic Program Generation. “Instead of having to write every code instructed, you’re really just describing what you want it to do,” said Kittlaus. “The whole idea of Viv is that developers can go in and build any experience that they want.

Here you can watch the whole demo:

Menno is Director of the Sogeti Research Institute for the Analysis of New Technology (VINT). He mixes personal life experiences with the findings of the 19 years of research done at the VINT Research Institute.