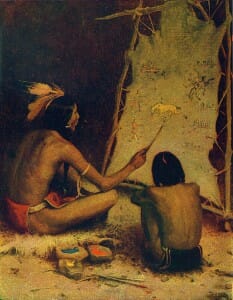 Searching articles about models of distributed production (see this article), I found one centered on one of the most common topics of all, Transmedia Storytelling by Henry Jenkins[i], that “represents a process where integral elements of a story get dispersed systematically across multiple delivery channels for the purpose of creating a unified and coordinated entertainment experience. Each medium makes its own unique contribution to the unfolding of the story.”

Rules and principles of this discipline are beyond the goal of this post; you can find more precise definitions in this article and on this post but for the sake of completeness, Transmedia Storytelling (TS) is all about inventing a ”scenario” that is the common denominator of a plentitude of histories, movies, video games, books, theater representations and more, centered on that scenario, but not with the same stories (it’s not Crossmedia!) although all of them are related. For examples, Dungeons & Dragons (D&D), the role playing game, in time became a TS, with books, video games, live representations, animations, and the most famous of all, Star Wars.

The main principles of TS are the use of digital platforms with a purpose of an immersive experience for the consumer (but with a clear division between fantasy and reality), the world construction (the scenario), the contemporary presence of more points of view in the same universe (scattered across time or space for example), and perhaps the most important, the protagonism (and freedom) left for contributor in expanding that universe.

Although it seems a little collaborative, TS really needs prosumers because the majority of its production is UGC (user generated content). To add people you have to find them and attract them to your project, so, not surprisingly, the first great impact of modern technologies on TS was the adoption of digital platforms, especially social networks and cloud!

D&D took more than ten years to become not so well known and another ten years to attract a movement, mainly through direct knowledge of the gamers. Now with social media the same results can be reached in a matter of weeks or days.

Not only was social media adopted for simple knowledge. TS gives a really defined world, but the purpose is that the Prosumers will participate actively and develop by themselves that scenario. The ”relaxed ownership” of the universe is perhaps the most important rule, and in order to do this a better form of participation is needed. Sharing ideas by email is possible, but an open discussion is better. More than this, now the fans are free to propose, organize, and participate without the need for a promoter to organize it. That is one of the basics of distributed production.

Another fundamental element of distributed production is the need for infrastructure.  To reach zero marginal cost, TS recently had the opportunity to move some production into the cloud, and not only to increase the power of computation. The main goal of this was to reach the majority of Prosumers that don’t have the possibility to have such infrastructure, but sharing it across the globe makes it a possiblity now! To produce videos, share gigabyte of images and clips to work on them is a question of a few clicks now –  something that was impossible ten years ago, when the simple need to share the material was a major obstacle. The real function of the cloud is to zero the distance and permit a fluent and immediate collaboration over a global platform that is near all of you.

In the next post we will investigate other types of technologies that have great impact on TS. Stay tuned!