As a member of the “older generation” (yes, I did program on punched cards at one point in my life), I sometimes wonder if I’m going to leave the world a better place than I found it. 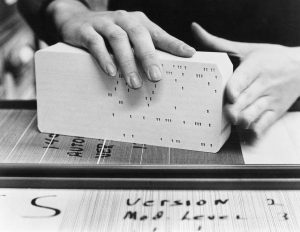 If so, I’ve always thought, then it will be because of technology–properly used–will help make it a better place. Perhaps not the technology I directly work on, but at least I can believe I contribute a small part.

And then there are times I am somewhat more cynical.

Perhaps the technology I work on will be used to take rights away from citizens–privacy is becoming harder to ensure.

Perhaps it will hasten a descent into a world where we are insulated from much of the complexity of the real world behind our Facebook groups, our Twitter feeds, our Netflix streams. Perhaps we will find ourselves living in bubbles in which we hear only confirming opinions and filtered facts.

Such dystopian visions of life come more easily as age and experience teach us about the dark side of human nature.

And then…sometimes…something intervenes to remind me that perhaps there is a better–if not exactly utopian–future in store. 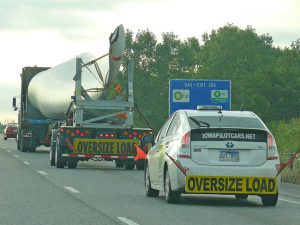 I pass and am passed by, trucks hauling these massive pieces of technology to their ultimate destinations. It’s easy to ignore them–they’re common enough to become background noise to my commute, at least when I’m not unreasonably annoyed by their intrusive pilot cars and their slow speed.

But, thinking about it for a moment, these behemoths represent one of the things that’s “right” about the direction technology is taking us.

Each of these blades represents an addition to the electrical generation capacity of the US that does not add carbon dioxide and other heat-trapping gases to the atmosphere. Given enough of these blades making their way to wind farms, there’s a chance that global warming will not make the next generation’s future less certain, at least in terms of climate impact.

I have only limited knowledge of the range of technologies used to create, transport, install, and maintain these turbines. I may provide a small part of the technology that manages them, or tells the customers how much of the power generation in their state is coming from wind turbines. In any case, I know I must have worked on some small part of preceding technological innovations–Internet routing, for instance–that plays a part.

And, I am hopeful.