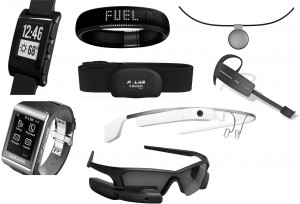 Wearable technology is becoming increasingly popular and is all set to become one of the biggest trends in 2015. ‘Wearables’ is not a new phenomenon and we  can date it back to the calculator watches in the 80’s. However, it was not until the last couple of years that it, actually, created a big buzz, with the markets realizing that this technology has immense potential and is interesting enough to attract a huge pool of mainstream customers.

The technical devices developed a few decades back, such as the calculator watch in the 80’s, looked as if they were designed by engineers … something that only a mother could love! Such designs didn’t have much appeal for the mainstream customers. Then, few visionary designers took up the challenge and came up with disruptive and smart designs for such devices, successfully bringing the mainstream audience on board. A distinct example of this is the introduction of the iPhone in 2007. No… it was not the first smartphone in the market, but it redefined how a smartphone could look, work and be used.

This is now happening with wearables too. These are being transformed from black plastic, unimpressive things into visually appealing, smart-looking products. To name a few:

Nowadays, people are becoming more health and fitness conscious. They want to exercise to be in shape, feel good, and live a better life. The companies, producing wearable devices, are using this evolving behavioral pattern of people to advantage and launching products that will keep track of every calorie they burn or every step they take, monitoring their heart rate at the same time. With such a bundled software, one can also set individual goals like losing weight and running faster and farther. These types of devices are not new in the market; however, these gadgets have come a long way from being used only by a few hard-core enthusiasts to becoming mainstream products, owned by millions.

When new products are launched in the market, they are packed with cool features, but often without any real purpose or value. They become niche products for enthusiasts but pave the way for the next iteration, to develop a more evolved device. I believe, we have reached that point with wearbles too. An example is the Google Glass. It has a nice design and cool features, but the question arises – when would one wear it and why? To address this, Microsoft came up with Hololens that makes the Glass look like a relic. The Hololens is not only about technology and cool features, but also about real-life applications. With this gadget, one can watch television, design objects, print on a 3D-printer, and also get instructions while performing tasks, among other things.

Johan Bjärneryd is a solutions architect that joined Sogeti Sweden in 2011. Since then he has worked with different customers in different sectors. 2012 Johan was appointed as national driver for Windows 8 and Windows Phone 8 in Sweden and he leads the mobility competence network in his home region.