It’s no secret that Facebook and other social media platforms are filtering what their users can see. First of all the reason is that they are working with A LOT of data and pinpointing the feeds to certain sources feels relevant. Usually if you are connecting to the person somehow, their posts appear on your feed. (Try it out yourself: befriend someone in Facebook and notice how most of their recent posts appear on your wall.)

Second of all it’s all about money: the ones who are willing to pay for exposure are getting their messages seen more frequently. We’re not running a charity here: the users of social media pay either with their money or their data.

The algorithms that are run in the different systems try hard to recognize the patterns you are working with. It’s the same with Netflix or Amazon: people like you liked this thing and they also ordered this other product. It’s efficient and usually it also hits the nail on the head: even if you don’t find something that you thoroughly enjoy, you are seldom disappointed.

However, the filtering does not necessarily restrict itself to entertainment and quirky anecdotes done by your friends. In 2016 a Finnish reporter working for Yleisradio (the national news network) did a story on how easily the feed can be manipulated simply by liking certain things. (The story in Finnish)

A long story short: he created a blank Facebook profile which had no friends. He then ran a basic setup for the profile by liking a lot of different news sites and then started clicking on the links that the feed started to show. Every time a link suggested to go further, he went there. It was pretty soon that the feed suggested him a link for a polemic “news” source which he then liked as per suggestion.

Two days later and after clicking “like” on all Facebook’s suggestions he noticed his previously blank feed was now a black cloud of hate with indescribable language used.

If we analyze the situation a bit it’s no wonder that this happened: the collaborative filtering works like this pragmatically. If several similar users click “like” on similar things, things tend to escalate quickly, creating a much different feed when compared to other users.

It is unknown what Facebook (or other providers) are doing to resolve the issue. It was also previously discussed by The Guardian in this year’s May Issue.

Either way – when the users look at their social media feed and believe it mirrors reality, chances are that the reflection is distorted and it should be addressed as such. 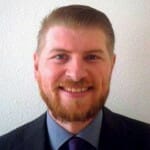 Michael is a Digital Solution Architect with a broad field of expertise. By combining a deep understanding of the customer context with a single view of the enterprise, he enables organizations to take real-time decisions and drive business growth. Underpinned by expertise in best-of-breed digital partner ecosystems, he provide a completely new spectrum of opportunities to clients, and enables them to be closer to their customers with more personalized, relevant content, seamlessly delivered via multiple channels, in new innovative ways.