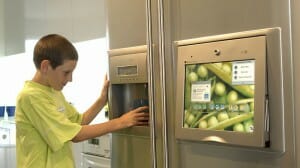 In case you haven’t noticed, the Internet is in the middle of a personality cross-road right now; no, you don’t need to hyper-ventilate in panic and please slowly move your finger away from the ESC key; it’s not that it will disappear any time soon or will be used any less, it’s the way it is being used that is changing faster than you may think.

In a recent article published on Quartz titled “Why most people aren’t downloading apps anymore“, the author makes a very compelling analysis on the number of apps downloaded per month, the big winner?, a big fat zero! It seems that long gone are the days of that made Apple’s iPhone so innovative, the apps, and yet on the recently released iPhone 6, one of the key features is Apple Pay, which is a combination of an app and the Internet of Things; certainly the app model has tons of advantages and I’m a big fan of it, but Do we really need 10 different iterations of Angry Birds in our device?; people are concentrating on what they really need; those are the few apps people will download, eventually use, and that’s it.

The article navigates through another very interest indicator, the number of times that these apps have been launched and for how long people are using the app (session duration). In my opinion the results are mind-blowing, I would be very curious to see the age, gender and operating system segregation of this data. Social apps, think Facebook, Twitter, Instagram, etc. are launched in average 25.1 times in a month, no surprise there, basically, we’re using these apps every single day; however, the length of the session is only 2.5 minutes; areas like music, news and games are launched less times, but we’re spending more time on them per session; and this is actually a general increase of 21% over last year’s measurement; at this point you may perhaps be thinking, “but I do play Candy Crush for hours on end”; but for the bulk of the population; they launch the app, glance at the information and that’s it.

People are using their mobile devices more than desktops of laptops, not because of the app itself, but for the freedom, the instant gratification, the always-on connection; ultimately, it’s the Internet of Things that seems to be the bridge for this gap creating this personality dilemma and revolution on the Internet.

The Internet of Things is opening a whole new world of information access, in some cases as a 2-way avenue of information. We know it is actually been introduced to us and we’re not even noticing in many cases; it is crossing the gray line between virtuality and reality making it easier for us to adapt to things we use, and used to interact with before on specific slots of time and space.

Lately there is a big trend of wearable devices which comes in all shapes and colors to blend your individual personality and style, they can track your heart rate, paces, route, distance, etc.; all through an integration between the device and your smartphone through an app; you know it’s just a matter of time when these integrations will take another 1 degree of separation, so when your child gets home, the door will notify you, your wireless internet camera will allow to chat with them, and a device embedded as a chip on your kids clothes will tell you if he or she is hungry, what he/she ate at school and enable communication with your refrigerator to suggest what food to take based on the inventory recorded by the refrigerator; oh, by the way, all this information is also being fed to local grocery retailers and newspapers; so the next time you actually log on the Internet or next Sunday when you read the newspaper, these entities will push advertisement back at you based on the data collected from your needs and day-to-day activities; all of this will still travel over the Internet, but it’ll be pushed from one side to the other and presented to you in a total different form and shape; it will not being “accessed” as you traditionally do today.

What you see and do today is not necessarily a coincidence. Chances are that it is the result of data collected about you and your behaviors; many of them are useful and sometimes they make your life a bit better and easier: have you ever wonder how is Google able to map road traffic? Some others may be not as useful and be rather annoying or even dangerous; but something is for sure: the technology, the digital transformation, the integration and the innovation are tremendous.

Yvan Hernandez has been with Sogeti Chicago for the last 3 ½ years. Started as Manager Consultant specializing in SharePoint and .Net and quickly became an SME for SharePoint leading the SharePoint community of practice for the next 2 years. Yvan was promoted to Senior Manager in December 2012 and currently leads the Business Applications practice. Within Sogeti USA, Yvan actively participates as SME within the Microsoft Alliance Group for Yammer after securing partnership level by obtaining his Power-User, Administrator and Community Manager certifications in 2013 and with the Business Critical SharePoint (BCSP) group; he is also a member of the National SharePoint leadership group.