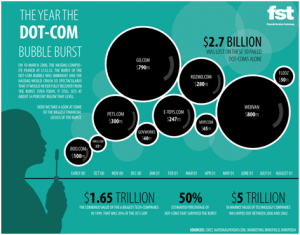 The year 1997 was a remarkable year in the IT world. From this period until the year 2000 there happened something called “the dot-com bubble,” a phenomenon realized through fast-growing Internet companies which resulted in high stock prices. The high stock prices resulted in speculations which led to the bubble burst in March of 2000. The bubble burst was followed by a worldwide recession. That was back in 2000; what have we learned from that period?

Today I read an article from Fernando Labastida called: “Why this year the “Internet of Things” will explode”. Where in today’s world the big Industrials are claiming their own Internet of Things related marketing buzzword, Labastida is talking about the IoT bubble which will burst in 2014.

In his article Labastida gives us 4 reasons to explain his vision:

When we look at the 4 reasons why Labastida thinks the IoT will burst we cannot say he is not right on his reasons. Yes, energy consumption has gone way down. Yes, the price of technology has gone way down. Websites like Kickstarter and Indiegogo are proving he is also right on his third and forth point. The only question is, will those reasons be enough to let the IoT market burst?

The collective noun of the Internet of Things is not new. For years, similar ideas have been done around globe. The key message? Connect the unconnected to create insights where companies can steer on. But, not only the collective noun is not new. Also its harbingers are not, fast growing IT companies, start-ups, youngsters at the head of a global company and so on.