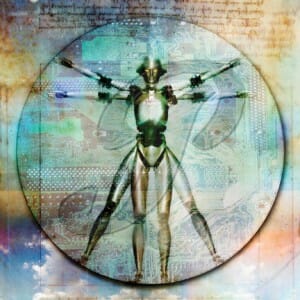 Transhumanism (often abbreviated as H+ or h+, as for Human+) is an international cultural and intellectual movement with the goal of fundamentally transforming the human condition by developing and making widely available technologies to greatly enhance human intellectual, physical, and psychological capacities, and thus reducing diseases and extending human life.

Transhumanists do not consider diseases and death to be a fatality, and they believe that human beings should use all possible solutions offered by sciences and technologies to improve themselves.

Google is becoming one of the main architects of this movement and actively supports transhumanism revolution. Some of the most famous Google members are openly and actively promoting this movement, such as Vinton Cerf (Google Chief Internet Evangelist), or Raymond C. Kurtzweil (appointed Director of Engineering at Google in 2012, and active member of Singularity University).

At birth, the main goal of Google was to make available to the world all possible knowledge, by providing  a lot of different ways to do: its search engine, but also google books, google code, google map, google earth, google translate… and many others.

In less than two decades, Google has become ubiquitous in everyone’s life: every day Google answers more than one billion questions from people around the globe in 181 countries and 146 languages.

To grow rapidly, Google has done for 17 years many buyouts of companies, sizes and of different types, either to swallow up competitors, or to obtain some techniques and technologies internally.

This has helped to extend its empire, and this acquisition policy continues today with great success: In 2014, Google has surpassed Exxon company (king of oil), and is now the second market capitalization in the world, behind Apple, with 53.000 employees, and available cash of $55 billion. Google is investing today in many different markets, hoping to build on that or those that will be highly profitable in 2020.

But recently, Google’s ambition changed, and this company is now going slowly towards the merchant control of life in various ways.

Health domain is today a burgeoning market, but it is becoming increasingly digital and already generates gigabytes of data per patient. Google was already able for some years to detect an epidemic before State Medical networks, by analyzing user’s queries on the names of viruses, and correlating data with geographic origin of requests (Google Flu). This could be an extraordinary tool in epidemiology, prevention, and analysis of emerging trends and new diseases, if Google offered this opportunity to the medical community.

The interest of Google in Health domain is now even more official: Google has created a subsidiary specifically dedicated to health, named Calico (California Life Company) in September 2013, with M. Art Levinson, chairman and former CEO of Genentech (a pioneer of biotechnologies) and Chairman of Apple, as Chief Executive Officer and founding investor. The avowed aim of Calico is to increase human life expectancy from ten to twenty years by 2035. To succeed, this will require, amongst other things, massive computing power that can support its parent Google.

Google invests and also anticipates the needs in other nearby areas: DNA sequencing (subsidiary 23andMe, headed by Sergey Brin’s wife, one of the cofounder of Google), but also technological innovation internal to Google via its Google X Lab, such as connected contact lenses, equipped with a microchip to measure glucose (238 millions of people are diabetics worldwide and World Health Organization predict 438 millions diabetics in 2030).

For Google, the life domain has become one of the future new growths in the coming years:  The “death of the death” is an ancient dream becoming a major issue for Google, and for the first time in the history of humanity, a company has enough firepower to work efficiently on this subject, by creating new technologies, and working on a lot of different research topics.