When it comes to inspiring technology, an MRI scanner is not necessarily the first thing that springs to mind. It’s clunky, expensive (even for hospitals), costly to use and let’s not forget you need specialized personnel to operate one. Combine these factors and it’s not a coincidence that even in first world countries like Canada there are only 9.4 MRI scanners per million population. The scanner is an incredible marvel of human technology, if you spend about an hour in an MRI scanner it’s possible to see if you have a tumor or some other specific disease. 10 to 100 hours and it can reveal what words you’re about to say, what images are in your head or even what you’re dreaming about! Even though an MRI scanner is not necessarily considered “new technology”, I think the MRI world is about to be disrupted.

A start-up called ‘Openwater’ is developing a prototype MRI scanner that is wearable. It works with near-infrared light that can penetrate cells and is able to measure your blood oxygen level at any time or place, even in your brain. Whereas an MRI scanner delivers a blurry image, this light based technology is able to deliver an image quality so sharp that it can show you exactly which neuron just fired in the brain it’s scanning. Not only can it deliver an image that is 1000 times as sharp, it does this on all 3 axis, making the image essentially one billion times sharper. This near-infrared light is especially good at finding tumors. A tumor “steals” blood for itself and thus has a 5 times higher blood ratio than for example your flesh. Blood (being red) absorbs more red light and voila, an anomaly appears in the scan.

The raw data this technology could provide may be the start of a breakthrough in the field of mental illnesses like depression, anxiety or PTSD. Having an epileptic seizure is quite rare, think of how small the chances are of having a seizure whilst in an MRI scanner. Taking the scanner factor out of the equation however, the chances of retrieving valuable data are far more likely!

An even cooler application of this technology is the possibility to activate neurons inside the brain. My mind wanders immediately to the practical applications. As I mentioned at the start, even an MRI scanner is able to “read” your dreams. Wouldn’t it be cool if this device would be able to “record” your dreams at night and could play them back to you in the morning? Not only on some kind of screen but it would actually be able to project them into your brain. Or what about linking your brain to someone else’s? You wouldn’t have to use words anymore to speak to them, your brains would naturally communicate at a pace that you couldn’t possibly comprehend by using speech.

I’m very excited to see what this technology grows into! 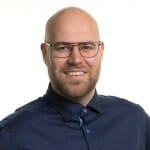