Hi! If you’ve missed the first episode of Capgemini’s “Data and The Hunch” podcast series, here’s the transcript. I am a Principal Analyst for VINT, the Sogeti Trend Lab, and work on anything Analytics related to the Connected Service Experience. This first episode talks about how machine intelligence has the potential to take your Big Data analytics culture to newer heights… 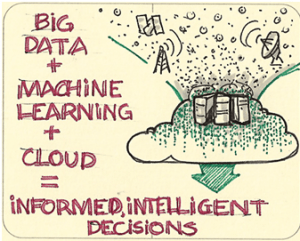 At the end of 2014, Forbes brought this intriguing statement in black and white: “Deep Learning and Machine Intelligence Will Eat the World.” We know that Forbes has a track record of putting things boldly, but since Microsoft launched Azure Machine Learning in February 2015 and Amazon Machine Learning saw the light two months later – you now can simply use Machine Learning techniques, and pay as you go, using these cloud extensions that facilitate data-driven Predictive Analytics for the rest of us, expanding your sense-and-respond Business Intelligence (BI) and your anticipate-and-shape Business Analytics (BA). Microsoft and Amazon are further democratizing a remarkable trend, which, among others, Google Prediction API and BigML’s “Machine Learning for Everyone” had been pioneering already.

Bill Gates has been cherishing the vision for some time: “A breakthrough in Machine Learning would be worth ten Microsofts,” he said a few years ago. Or perhaps you prefer John Hennessy, President of Stanford University, who repeatedly confirmed that “Machine Learning is the hot new thing.”

All this immediately raises some important questions, such as: Deep Learning, Machine Intelligence, Machine Learning, Big Data, Artificial Intelligence . . . ? Please explain! And, I was just considering to look a little more seriously at BI, decision making and Big Data – while all of a sudden, everyone wants to sell Machine Learning to me. Huh?

Let’s take Amazon. The company advises you to just experiment a year long with their new Machine Learning product, for free. You don’t need to be an expert in statistics, a data analysis wizard, or an Artificial Intelligence big shot. Quite the contrary: one single programmer now can achieve the same in 20 minutes that previously took 45 work days. You only pay 42 dollar-cent per compute hour, plus an extra dime, for every one thousand predictions.

That’s a bargain – if only you would have known this earlier, it might have saved you some costly Data Scientists, or at least they would have been better equipped. But no, you didn’t miss out on anything: this kind of accessible and affordable data services is brand new. Oh yeah! You might favor a supercomputer based solution? In that case IBM has a slew of great Watson services on offer. And just wait for Quantum Computing to catch on – that will put developments in overdrive. By all means, stay up to speed and prepare for driving in the fast lane.

Following Ms. Shivon Zilis, a young venture capital investor and a fine researcher at BloombergBETA with an excellent hunch for disruptive development, I put Machine Intelligence (MI) atop this confusing cluster of tightly-knit notions and application domains. It immediately allows us to address the big questions. How is MI different from BI and Business Analytics? What is it compared to Artificial Intelligence? How is it that AI all of a sudden, after decades of hope, hype and disillusion, awakes from its hibernation? How does MI compare to human intelligence? How do cloud, Big Data, Machine Learning and advanced computing techniques fit in? Will all promising announcements herald a true breaktrough? Little money and lots of time are to be spend everywhere, but how and when will Machine Intelligence and other birds of a feather show up in my operating result? Do I really need all this . . . ?

Professor Liang Huang from the City University of New York, explains it this way: “Machine Learning is Automating Automation. It is about getting computers to program themselves: letting the data do the work instead. That’s no magic but more like gardening: think of algorithms as the seeds; of data as nutritients; of yourself as the gardener; and of programs as the plants.” Today, there already are tens of thousands Machine Learning algorithms in existence, says Huang, and each year hundreds of new ones join in.

In May 2015, Nature featured an article called Probabilistic Machine Learning and Artificial Intelligence written by Zoubin Ghahramani, the Professor who heads the Cambridge UK Machine Learning Group. The overarching topic reads as: “How can a machine learn from experience? Probabilistic modelling provides a framework for understanding what learning is and [ . . . ] has a central role in scientific data analysis, machine learning, robotics, cognitive science and artificial intelligence.”

This serves to show that apparently and without exaggeration we are allowed to easily also include Scientific Data Analysis, Robotics and Cognitive Science. How tangible and ambitious Machine Intelligence with all is flavors and effects already is today, can be derived from this overview of objectives, products, markets, and players by Ms. Shivon Zilis (www.shivonzilis.com): Departing from the eight core domains of Artificial Intelligence, Deep Learning, Machine Learning, Natural Language Processing, Predictive APIs, Image Recognition, and Speech Recognition companies and startups are frantically attempting to rethink and restructure organizations and industries, and of course how to radically improve the manifold relationship and interaction between humans and machines vice versa.

Of course taxonomies without disputable choices and arbitrary overlap are few, if not impossible, and in the context of ML and AI they are common practice and plentiful. Moreover, Ms. Zilis’s overview is a snapshot of fast-developing domains. That’s probably why Amazon doesn’t show up here, and why BigML only ranks under the Predictive APIs category.

Palantir is featured though, and rightly so: in July 2015, the company managed to enter the top 5 of The Wall Street Journal’s Billion Dollar Start-up Club where it now as #4 (with star!) accompanies Uber, Xiaomi, Airbnb and SnapChat. To put things in context, here are the top 10 valuations and dates as of September 2015: 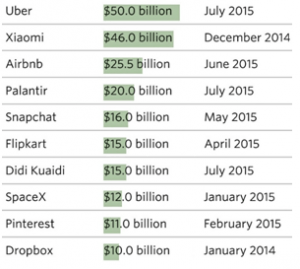 After a capital injection of 450 million, Palantir today is valued at 20 billion U.S. dollar. Who still doubts that there is money to be made with Big Data predictions? Change your motto into “No More Secrets with Big Data Analytics,” I’d suggest. From 2004 on, Palantir grew up as a CIA startup. The company now is big business, serving giants in many economy defining industries; and probably a lot of others we’re not supposed to know.

Shivon Zilis takes the semantic bull by the horns and explains: “MI is a unifying term for what others call Machine Learning (ML) and Artificial Intelligence (AI). When I called it AI, too many people were distracted by whether certain companies were ‘true AI,’ and when I called it ML, many thought I wasn’t doing justice to the more ‘AI-esque,’ like the various flavors of Deep Learning. People have immediately grasped Machine Intelligence, so here we are.”

MI, period. And why not? Since the famous AI start-up Numenta also talks of a New Era of machine Intelligence. We’re talking extremely fundamental stuff here, as well as a broad range of practicalities – that much is clear. From a respected scientific magazine like Nature to 42 dollar cent per compute-hour plus an extra 10 per 1000 predictions – quite a striking difference, I would say . . .