Cyberpunk is a sub-genre of science fiction where there is a radical shift or change in the social order combined with advanced technological and scientific achievements. The society is often dominated by computer technology and big corporations. The living conditions are strange and hard, the weather is often bad (misty, a lot of rain, dark) and the tech is really advanced. The genre is expressed in art, fiction, postmodern literature, manga, and movies. From the latter category, The Matrix Trilogy is a good example, as well as Ghost in the Shell (manga and movie) and Blade Runner I + II.

Sometimes when I read an article or a friend tells me a story I suddenly recognize some Cyberpunk aspects and realize the future I was dreaming about when I was a kid is already here. I want to share three separate examples I consider, at least partly, Cyberpunk:

1) Begging with a QR code 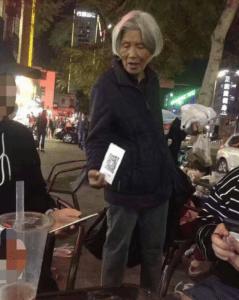 this is a pretty common form of begging: homeless people ask you to scan a QR code. That’s it. No strings attached. Or at least, so it seems.

According to WeChat expert Matthew Brennan the beggars are getting paid 1.5 to 0.7 yuan ($0.23 to $0.11) for every person that scans the QR code. The person who scans the QR code then gets redirected to a shady WeChat account that starts spamming. (WeChat is a Chinese app which can be seen as a merger of Facebook, WhatsApp and PayPal. Read more about it in our report The Bot Effect, Friending Your Brand.)

Brennan states that besides receiving spam there is a chance your WeChat ID and your personal information gets ‘harvested’ and sold.

So the scenario is this: a woman is living on the street and doesn’t own much. She is hungry and wants money. She shows me a piece of cardboard and asks me to scan a strange image with little black and white blocks (QR code). Then I take my little hand-sized supercomputer (smartphone) out of my pocket, scan the strange picture and then she moves on and leaves me baffled behind… I consider that situation strange and yes, definitely Cyberpunk.

2) Protesting in front of Trump Tower 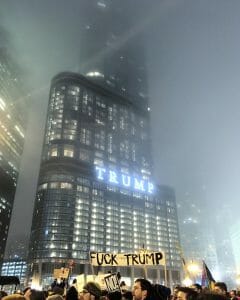 This photo is one of the most upvoted photos in the Cyberpunk community on Reddit. People find it a striking representation of the Cyberpunk genre. The mist gives the photo a mysterious radiance and makes it easy to fantasize about a setting in the future. The prestigious Trump Tower has a futuristic gloom around it due to the mist and the brightly enlightened letters. Somebody who names a tower after himself is probably a really wealthy and powerful man. The protestors, or (let’s dramatize a bit) ‘the pour souls on the street’, are carrying a sloppy handwritten sign with ‘Fuck Trump’.

The sloppy handwritten ‘Fuck Trump’ sign VS. the futuristic bright ‘Trump’ sign on the impressive tower and ‘the poor souls on the street’ who protest VS. ‘a very rich and wealthy man’ are strong contrasts right out of the Cyberpunk genre. These contrasts make you think of the first part of the Cyberpunk definition: “a radical shift or change in social order”.

And of course, there is also a dramatic tension in this photo which is linked to our current reality. A divide between groups of people who seem to have lost the ability or willingness to listen to each other. And on top of that there is a president that kinda acts as a Cyberpunk himself by decorating the digital walls of Twitter with his Graffiti slogans which warn you: trust no one, everything you read is Fake News!

For the third example, I want to tell you about a concept, not just a photo. Through the rapid advancements in technology, development-as-catching-up can have an alternative: leapfrogging. The term leapfrogging refers to the skipping of certain stages of development. In the context of Cyberpunk, we find a clear example when we look at cell phone usage in remote areas in developing countries. The people there completely skipped the landline phase. Imagine what that is like: one moment you can’t call at all, maybe you don’t even know the concept of ‘calling’. The next moment you can call your whole family, all your friends and build (inter)national business relationships. For some people, it also means they can set up a bank account or rely more on Bitcoins instead of their own valuta.

Ecological leapfrogging is another example. In this case, environmentally harmful stages of development are skipped. E.g. advanced solar energy technologies are seen as alternatives to building a fossil fuel based infrastructure. Lighting Asia, Lighting Africa, and Husk Power Systems are examples of such projects. 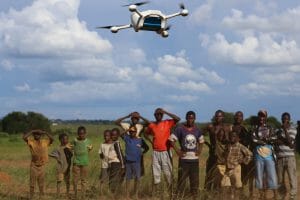 Lastly, with the arrival of drones, there are speculations about another possibility for leapfrogging. In areas where a vast network of roads is missing drones can play a part. Zipline, a Silicon Valley-based startup, wants to use drones in Rwanda to drop-off packages of blood to hospitals. There are still a lot of women dying during childbirth because they can’t get blood quickly enough.

In the case of leapfrogging the Cyberpunk, aspect is that the advanced technological and scientific achievements really stand out due to the rapid and big leaps and changes.

Put your cyberpunk glasses on

So three different examples with Cyberpunk elements. When I put my Cyberpunk glasses on, I enter a perspective which shows me that the future is, in some ways, already happening. The three examples above are just a selection. Maybe you thought of other examples while reading, maybe you will think of them during the rest of the day. I hope you will; discover and enjoy! 🙂 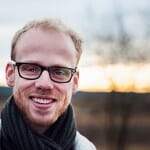