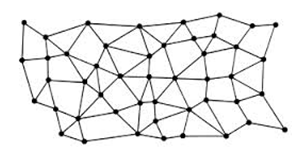 Some time ago I was reading an interesting book over distributed economy, a way of thinking production where, versus the classical centralized system, its purpose is to distribute production over the territory. The primary purpose is a more economic and efficient production system, but its implication will resolve a lot of modern problems, such as overpopulation of cities, the loss of the territory, pollution, social conflicts rising for ‘zero’ life-space of modern life, and reaction to the life-style that this ‘pushes’ (for example: slow-food movements, ‘zero km’ products etc… etc…). [1]

One interesting aspect is that this way of rethinking is not a modern one. Historical examples are present, as well as success cases,  but, until now, the limits for implementing an economy system was almost all the lack of infrastructures and the need to replicate processes. Until now…

These days, technology is shaping economies to be more energy efficient and collaborative. Sharing resources, knowledge, and infrastructures is now a matter of every day! A new way of making it is not a future, it is the present! A global infrastructure is near to being born. 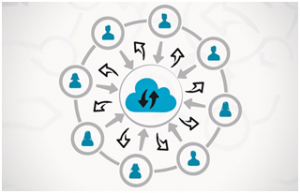 What’s really interesting is the reason that’s giving birth to this new economic system. The reason is called ‘zero marginal cost’, which is the cost of producing additional goods and services after fixed costs are covered. The heart of this transformation is ‘collaborative commons’. Reducing costs is always a goal of marketing experts. The technology revolution we are experimenting is so powerful in its productivity that it might reduce those margins of cost to near zero, making goods and services essentially free, priceless, and beyond the market exchange economy. [2]

This is not only for applications, there are also sharing of cars, homes, clothes, and other items via social media sites, rentals, redistribution clubs, and cooperatives at low or near zero marginal cost. The most important of those examples is perhaps the energetic production.

If there’s an example of how the zero marginal cost phenomenon can change society and be really disruptive is how the World Wide Web invaded the newspaper industry, the magazine industry, and book publishing industry. What we are seeing is that millions of costumers became millions of prosumers(producer-consumer), consuming content and publishing it as videos, blogs, wikis etc…etc…

The zero marginal cost phenomenon disrupted major industries but also helped even the playing field. Many companies went out of business, but many new companies were able to rise up on the wave of this disruption. The Internet of Things will increasingly connect everyone and everything in a seamless network. Data will flow from a central system to one device and from device to device, giving the possibility for a direct share, better real-time planning, immediate feed-back, personalized algorithms, and reduce of waste of time and materials.

We are experimenting in the third industrial revolution. Although it is in its first steps, it is the most important transformation that our civilization had begun in the last two centuries!

[2]: Jeremy Rifkin, 2014, The Zero Marginal Cost Society: The Internet of Things, the Collaborative Commons, and the Eclipse of Capitalism