A flexible, cheap and innovative business are goals companies have. Moving to the cloud, change the way of working and make the systems more flexible are 3 drivers to reach this goal.

Three forces are pushing the continues DevOps evolution: The Cloud Platform force, The System Architecture force and the Collaboration Force.

3 forces and 5 tips to stay relevant on changing DevOps.

… a triangulation on ideal practices for app development, paying particular attention to the dynamics of the organic growth of an app over time, the dynamics of collaboration between developers working on the app’s codebase, and avoiding the cost of software erosion.

Next to practices covering CICD pipelines, the 12 factors also describe practices for systems. Practices like -Treat backing services as attached resources- and -Export services via port bindings. There are more practices and patterns to flow for cloud-native and for services systems.

Cloud native, although this term seems to be hijacked by Pivotal and an organization who promotes containers it is not only restricted to these technologies. Cloud native systems are born in the cloud and comply with the cloud rules. As Gartner describes:

… a solution with elastic scalability metered consumption and automation…

How to Architect and Design Cloud-Native Applications

Microservices are smoking hot. The big question in software development is about dependencies, how to break down systems in independent modules so development, run, versioning, updating etcetera is easier. Microservices as the word already says, makes things smaller. 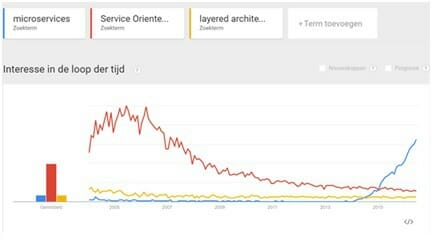 On the website of Martin Fowled, a Microservices Resource Guide can be found a good read is also Microservices (aka micro applications).

I like this presentation (messaging and microservices) from Clemens Vasters with insights on how Azure is designed with services valuable.

With all these principles in mind (and without losing the goal of business valuable out of sight)  let’s start building.

The system I’m using for explanation is a cloud-native services based system build a while ago during a hackathon, see: Building a DevOps Assessment tool with VSTS, Azure PaaS, and OneShare in minutes. It evolved to this. 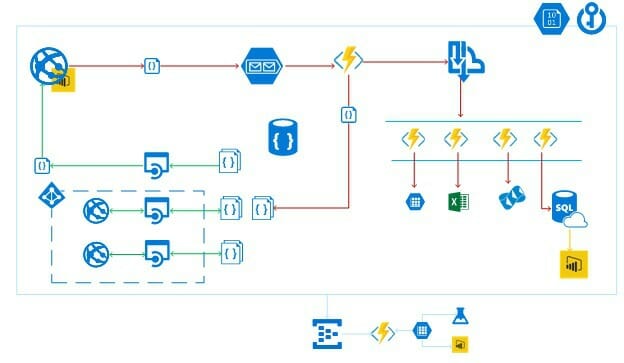 It contains several App Services (Web API and Functions), some backed up by AAD, a storage account, DocumentDB with several collections a Message bus topic with subscribers, Sendgrid and a SQL database for reporting via PowerBI. A small supporting subsystem for monitoring contains an Eventhub. Settings are secured within an Azure Key Vault.

An Azure Enterprise Agreement is organized in Departments, Subscriptions, and Resource Groups. The differentiation is more or less based on security and costs. Where subscriptions fit in a department, which is a kind of cost entity. A Resource Group contains the real functionality, the azure resources.

It is a best practice to create subscriptions for DEV/TEST and ACC/PROD. It helps separation costs for the environments and control access rights. It also common to have the dev/test subscription in a different EA tenant as ACC/Prod.

Note: Azure subscriptions in an EA portal can be created with MSDN benefits, only MSDN subscribers are allowed to access the subscription. These users have paid licenses for many Microsoft products and will have lower subscription costs.

It is a good practice to separate the different environments (DTAP) in different resource groups.

Another separation in resource groups is based on usages and responsibility categorization. Cloud systems not only exists of application components with a clear business usages. There are supporting Azure resources. You can compare them with the old on-premise network/ infrastructure and with middleware components, used by multiple applications and which needs to be in place to run the application components. 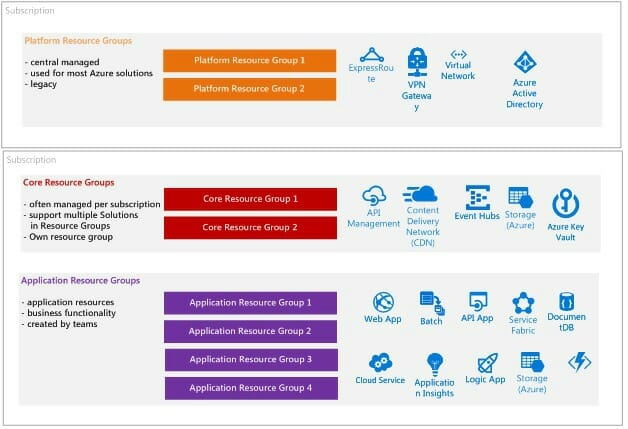 Cloud native systems also have these generic resources. The categories are:

A system should be divided into these categories where every category has its own resource group(s), RBAC and costs insights.

Core components in the sample application are the Azure Key Vault, Storage, DocumentDB, Event hub, SendGrid and the SQL Server. 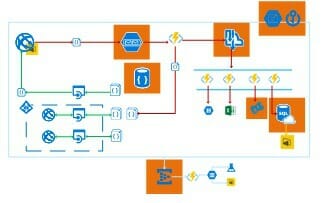 The challenge is always, who is responsible for the Platform and Core resources. Core resources are a sign of danger. They support multiple services, they are a single point of failure, a centralized system. See Clemens Vasters presentation somewhere around 9:30.

This structure for Azure subscriptions and resource groups supports the principles of independent systems.

A service, a deployable component which can evolve independently, will have its own GIT repository. The GIT repository of a service will contain all the resources needed to release the service. This will be the ARM template, the external packages, the configuration and the sources. Actually, the same structure as for resource groups. 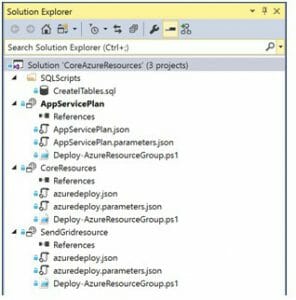 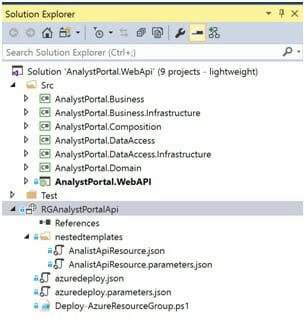 The different GIT reports support the principles of decoupled systems and everything under versioning. It makes releasing the different components individually easy. 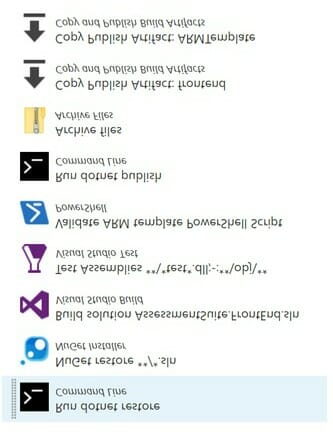 This is done for all services/ GIT repo. Which gives a nice overview of the state and quality of all components in our cloud-native system. 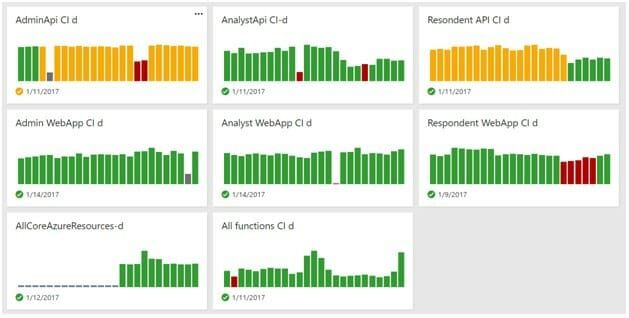 There is something wrong with an API.

All actions are related, dependent and automated.

Most services depend on the Core resources, which should be provisioned first. This dependency is most often reflected in connection strings, key’s, id’s, etcetera, information which is different per environment and require a secure treatment. This is where the Azure Key Vault comes in.

During the provisioning of the core resources, all secrets which need to be shared across application resources are populated in the Azure Key Vault. Only a principle account which is known by Visual Studio Team Services has access rights to the Key Vault.

An Azure Key Vault is used per environment (DTAP)

Register a secret in the Azure Key Vault.

The guideline for ARM’s is that one template and parameter file is used for all stages. The only variable used is the one that points which stage the ARM is deployed to.

The naming of the resources is constructed, based on this single parameter according to naming conventions. For example,

The release for an App Service within Visual Studio Team Services is pretty simple when all this is in place. Three steps:

Clone the environment in VSTS Release, change the one environment variable and run the release again will result in a complete similar environment.

All this resulting in a fully automated release of all components, with a least privileged mindset. All stages have the same environment configuration and are completely decoupled from each other.

Transparency comes out of the box with Visual Studio Team Services. From a release, it is easy to dive in the executed tests, the commits with code changes, the reviewers, the discussions and the underlying product backlog items. 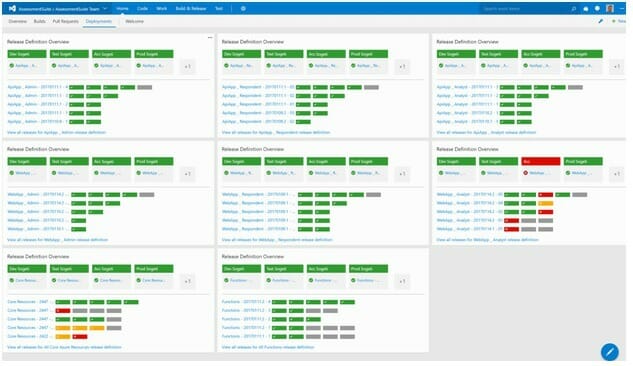 Still something wrong with one service 😉

The only thing what is left is the feedback loop back from the running system, the Azure Event Hub is used for it. But that is something for another post.

Creative thinker, solution and service builder. 20+ years of success with complex innovative software systems. Innovate on DevOps and to move to the Cloud and build Cloud services.