I was recently invited to participate in a panel discussion by John Deere Tech Center India as part of their Annual tech conference. The topic was “Autonomous Technology… beyond Autonomous Cars”. On the Engineering Director’s request, this topic was discussed in front of their 400+ engineers and the only intention being for them to realize what the technology potential was beyond the hype of a self-driving car, and especially in the context of their domain – the Agricultural Industry and heavy machinery. My fellow panelists were Sandeep Ranjhan – Senior VP, Harman International, US, Kishor Rao – Managing Director at Mathworks India and Devendra Bahirat – Business Head, JDES, India. 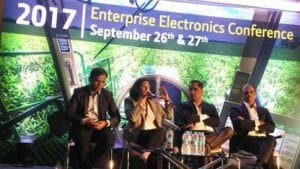 It was an interesting mix – Sandeep talking about Samsung ambitions in this domain, the acquisitions. A fund of 300 Million USD pledged for Autonomous cars and the recent permission for self-driving car granted to Samsung by California DMV and a potential demo of the Autonomous POD at CES2018.

Kishor’s focus being tools that enable development and validation of the technology, more specifically the AI toolbox for Matlab and Simulink, he encouraged engineers to focus on the domain. Absolutely on the dot…he was. Domain is the layer where u harness the technology…

But the most interesting view was from Devendra Bahirat – he has the honor of working on the technology that powered the first version of the AutoTrac system that John Deere made way back in early 2000! The view from the practitioner is that the technology has been developed, be it the The Machine Sync system or AutoTrac Vision or The AutoTrac RowSense system. Hands-free steering is already a feature that most farmers would like to use and in Australia its usage is more than 90%… and yet…. This technology is not pushed to replace the farmer and it will not be for some time to arise… its leverage is to majorly increase the productivity for growers on large-scale farming operations by enabling

The goal is not to replace the farmer, instead enable him / her to maximize the yield at lesser cost. Clearly, the effort is to have the human in control of the technology. As far as the technology development and maturity of truly Autonomous Systems goes, I would say we are at stage 2, where the technology we have in near maturity is aimed at “Automation of Inference and Decision Making” .. the next being “Automation of Intelligence” leading to “Emergent behavior” and finally, “Technical singularity” that Elon Musk and Stephen Hawking is so wary about. It will be an interesting decade after 2029, with predictions on Singularity!

Challenge will be in form of dynamic situational decision making, which beyond a point will not be feasible to run in simulations. For example, weather forecast influence on machines, selectively controlling infected area of crops in the field with required medication and so many other things human brains are capable of in drawing decisions and taking related actions based on situational evidences & visual perception analysis.

For sure… going ahead machines will be taking decisions faster than humans is believable, but will the collective super-intelligence of machines surpass all human intelligence is something worth more than just a passing thought!