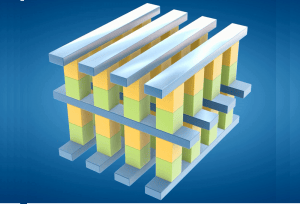 New hardware will make your computer and phone 700% faster

The flash memory technology (NAND memory) that is used by phones, digital cameras, mp3 players, flash drives, and computers has been around for over a decade.  IBM and Micron have developed a new memory technology called 3D-Cross Point that uses less power, lasts longer, and is much faster than the current flash memory.  What this means for consumers is that phone and laptop batteries will run longer.  Device load and save times will be up to 700% faster.  This technology is also a boost for business applications needing to analyze big data for fraud detection, genetics analysis and disease tracking.

HP and San Disk have teamed up to compete against 3D Cross Point with their own version of memory called ReRAM.  They are also planning to release SSDs based on their ReRAM technology at the end of 2016.

The memory technology and competition is a good thing for consumers and businesses.  You think life is fast now.  It will get even faster.

Eventually this technology will be used in everything from your smart phone, tablet, digital camera, flash drives and more.  Imagine having your entire movie collection on your tablet or phone to watch on your flight.  Imagine having a smart phone that can pretty much replace your desktop with a wireless keyboard, wireless mouse, and wireless monitor.  The future is coming soon.